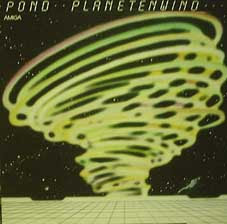 German space-synth band! Pond formed in 1979 in DDR and released their first LP in 1984 on the Amiga label. At the time, pop music was highly regulated and there were many obstacles for musicians- including licensing requirements for live performances and the challenge of acquiring synthesizers and drum machines.  Bands were not able to put out albums unless they were sanctioned by the state to do so and there was only one state owned record company.

I came across this lil’ electronic gem after some digging at my local record shop. I first became aware of Pond with the 2010 album ‘Mandarinen Träme: Electronic Escapes from the Deutsche Demokratische Republik 1981-1989.’ It wasn’t until recently that I heard Pond’s Planetenwind in full.

Wolfgang “Paule” Fuchs founded the band and worked with partner Harald Wittkowski.  They were both greatly influenced by Tangerine Dream and Klaus Schulze.  ‘Planetenwind,’ the title track of their first album was a huge success in East Germany and sold over 100,000 copies.