Skip to content
This September, we can look forward to a reissue of an album from electronic music pioneer, Laurie Spiegel.  The Expanding Universe was an album originally released in 1980 and consisted of four tracks.  Along with the original tracks, the reissued album will also include lots of previously unreleased material that has been put together by Spiegel herself and brought out by the label, Unseen Worlds. 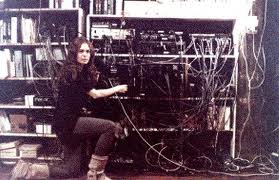 Laurie Spiegel was born in Chicago in 1945 and is known for her pioneering work with electronics and computer based music. Spiegel saw the potential of computers for musical expression; a means to provide a broader range of sonic possibilities. Throughout the 70s she worked at Bell Labs and used a computer system called GROOVE, designed by Max Matthews.  Her album, the Expanding Universe concentrates on subtle textures and variations in pitch and rhythm.  Spiegel was interested in experiencing the “momentary occurrences” found in her pieces, emphasising a focus on process rather than product.
“I automate whatever can be automated to be freer to focus on those aspects of music that can’t be automated. The challenge is to figure out which is which.”- Spiegel